California Dreamin’ (of In and Out)

From the desk of Jose Mier:

I’m not in the kitchen right now, but merely in front of my computer and I’m getting hungry. Why? Because I’m thinking about one of my favorite fast food craves: the In and Out burger. More specifically, the signature Double Double.

In all honesty I should rather be writing about food dishes in general rather than highlight something so specific. Also, this is a regional favorite. Those of you outside of the western U.S. may never have even heard of In and Out, but it’s a California favorite. As an aside there was a news report not too long ago about an In and Out hamburger being found on a sidewalk in New York City (link https://www.foxnews.com/food-drink/new-york-man-in-n-out-burger-queens). It was perfectly preserved and looked like it had just come from and In and Out restaurant. The trouble was there were no In and Outs for thousands of miles. So how did it get there? That just goes to show how popular this chain’s burgers are, meriting a story from NYC on national news.

The Double Double is called that because of the two beef patties used. You could get a single-patty burger but I always opt for this double meat morsel. It’s beautiful in its simplicity. Bun, beef, cheese, sauce (more on this later), lettuce, tomato and onion. There are a host of other burger places that use the same elements, but for some reason, In and Out’s fare surpasses them all. 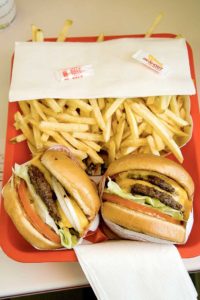 Looking at the burger more closely I have to say it’s got to be the sauce they use that puts their burgers in another category entirely. I never gave it much thought, merely enjoyed it, but I believe this is the way they distinguish themselves from the rest of the pack.

While it’s similar to other burger joints offerings, there’s just something about it that I hadn’t been able to put my finger on. And instead of looking further into it I would just eat and enjoy. Now, however, my curiosity is getting the best of me and I’ve been looking into just what goes into their sauce. In and Out isn’t going to come right out and tell me what exactly is in it so some investigation was necessary. Thanks be to the Internet.

If you’ve ever wanted to make some of your favorite restaurant dishes at home, you’ll be amazed at the number of “copycat” recipe sites out there. In the course of searching for some other dishes, I happened upon one called DinnerThenDessert.com. It’s run by Sabrina Snyder, a professional chef who has spent a LOT of time creating many dishes from well-known restaurants. She’s a California resident so she’s familiar with In and Out and added the Double Double to her recipe list online. Right now, I’m concentration on the special sauce by itself and she’s got a standalone recipe just for that. Here’s her simple list of ingredients:

Sure, it’s simple, but it takes time and effort to duplicate something exactly in the proportions necessary so here’s to you, Sabrina.

For now, however, I’m just going to hop in the car and grab a Double Double in the In and Out drive through but since this recipe is so simple and can be used for so many things, I’m glad I have it in my back pocket when the mood hits to do something at home.