Jose Mier here. Sun Valley seems to be a focal point for one particular kind of food that’s growing in popularity: Hot Chicken.

Personally I was pretty much oblivious to this dish for a long time. I think I saw it on some menus here or there but it didn’t dawn on me that it was not referring to the temperature at which the dish was served but the spiciness.

Hot Chicken, or usually “Nashville Hot Chicken” as you might suspect has its origins in Tennessee. It’s a twist on fried chicken in that the chicken is soaked in buttermilk, coated in flour, fried and then lots of extra spice and flavor are supplied by cayenne pepper, brown sugar, garlic and other spices after frying.

One key ingredient is a spice paste made from lard cayenne and other flavorful stuff that’s used to coat the chicken after it’s been fried. Of course each establishment will have its own recipe and most of closely guarded secrets. 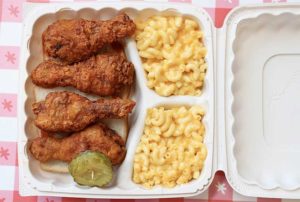 I’ve found that the dish seems to go back at least to the 1930s (and probably much earlier if it did come originally from the African American community in Nashville) and Prince’s Hot Chicken Shack in Nashville. The current spice paste recipe may be a more recent invention (1970s).

Whatever the origin, hot chicken is now a nationwide phenomenon and has spread all the way to our West Coast and to Sun Valley in particular. One restaurant that came onto my radar is Slangin’ Birdz on Glenoaks. If you haven’t had a chance to try this amazing and flavorful dish, now is the time. Give it a try and see if you don’t think it’s “da bomb.”